by Bryan Singer | Last Updated: May 30, 2018 When you buy something using the links on our posts, we may earn a small commission at no additional cost to you. Learn more. 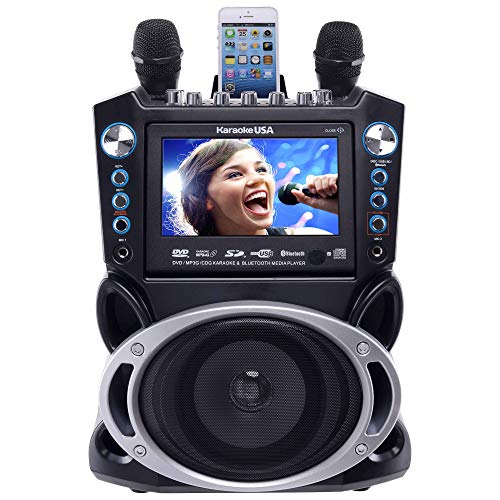 Watching your child sing to their heart’s content and generally having a fantastic time without spending too much cash appeals to every parent. We recently had a look at the USA GF840 portable karaoke machine, and thought we’d share our insights having used it for a few days.

It’s not specifically designed as a karaoke machine for kids, but it’s cheap and does the job so a lot of parents buy this for their little ones. It’s commonly sold with the CDs from Frozen and Moana, which tells you everything about who ends up using it!

As far as semi-portable karaoke systems go, the USA GF840 is really a fairly standard affair compared to any other generic machine being released these days. Sure, it has some nice features, but they’re more or less expected when you shell out $120 for a box that essentially plays songs, displays lyrics, and outputs sound with the kind of speaker you’d expect to find on a product in this price range. Like the system itself, the sound’s not fantastic, not terrible – it’s just competent.

And, really, we didn’t expect much more than that.

In terms of what this machine can actually do, it’s definitely suitable for anyone with a library of CD or CDG discs without a means to play them. It actually comes with 300 songs on 2 discs, but – be warned – they consist pretty much entirely of songs neither you, nor your six year old daughter, would ever want to sing at a karaoke party.

For anyone living in the 21st century, the machine also features Bluetooth compatibility, meaning that anyone with a suitable device (phone, tablet, laptop, etc) can easily stream audio to the machine. While the built-in monitor won’t display lyrics in this situation, there is a “universal” cradle which will allow you to mount most gadgets with ease while using the Bluetooth functionality.

Likewise, if you have access to a more impressive speaker system, you can easily hook it up via standard outputs; so, if you’d rather the sound was played through your surround sound system, that’s completely doable. And, likewise, if you want to display lyrics on your TV as opposed to the relatively small monitor which comes with the machine, you can also do that, too.

The backscreen is fairly readable, but when we used it we found that simply broadcasting lyric videos from YouTube on our phones was much easier; it meant that we could hold our phone up to read the lyrics while singing.

Additionally, it also comes with two microphones which are – again – neither breathtakingly superior in their quality nor horrendously poor. We weren’t particularly concerned with – nor expectant of – American Idol-quality sound, but it’s definitely sufficient for any singalongs at house parties.

Lastly, for those of you who are brave enough, the GF840 also provides the option to record performances to SD card (each MP3 file will contain a mix of both the music and vocals). It’s a nice touch, and we were able to share recordings with friends relatively easily (using a computer).

All in all, this karaoke machine is absolutely fine if you’re going to be using it for small parties. It does what you expect it to do, and – when all is said and done – it will sit unobtrusively in the cupboard until it’s needed again. 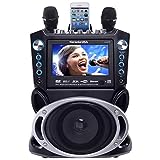